How to record external instruments in Ableton Live?

Ableton Live almost gave me a headache the first time I tried to record an external hardware synthesizer into an Audio Track. The recording appeared to be out of time and completely off the grid. Fortunately, I found a solution for this timing problem! 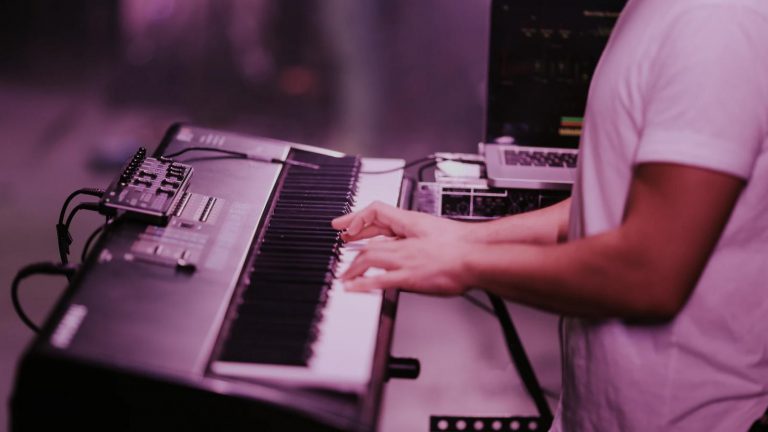 Ableton Live almost gave me a headache the first time I tried to record an external hardware synthesizer into an Audio Track. I put an External Instrument device on a MIDI Track in Live and played the synthesizer with a MIDI clip. After that I created a new Audio Track and recorded the audio directly from my ASIO soundcard to the Audio Track. Sounds logical, right? While playing along Live’s build in Metronome the recording appeared to be out of time and completely off the grid!

Fortunately, I found a solution for this timing problem on Gearslutz: route the audio from the MIDI Track with the external instrument device to the (armed) Audio Track.

Read on if you are still puzzled about how to record your synth with hardly any latency in Ableton Live. For the purpose of this article I recorded a four on the floor kick drum from the Bass Station II synthesizer into an Audio Track. First I created a MIDI Track with an External Instrument device and programmed a MIDI clip. The External Instrument device settings are as follows: The External Instrument device sends the incoming MIDI to the Bass Station II synthesizer and receives the audio from channel 2 of the audio interface. After recording the audio directly from the soundcard (Buffer Size: 64 samples) into the Audio Track, the kick drum is clearly playing out of time. See the picture below. The waveforms should begin at 1.4 and 2 in the timeline of the audioclip, but they start way too early:

Now the recorded kick drum clip is almost dead on the grid. Here’s the resulting (stereo) clip with the same 64 samples Buffer Size:

My goal with this site is to share what I learn while making electronic music. I love to help you to make more informed buying decisions while building up your studio at home!
More from this author

We use cookies on our website to give you the most relevant experience by remembering your preferences and repeat visits. By clicking “Accept All”, you consent to the use of ALL the cookies. However, you may visit "Cookie Settings" to provide a controlled consent.
Cookie SettingsAccept All
Manage consent

This website uses cookies to improve your experience while you navigate through the website. Out of these, the cookies that are categorized as necessary are stored on your browser as they are essential for the working of basic functionalities of the website. We also use third-party cookies that help us analyze and understand how you use this website. These cookies will be stored in your browser only with your consent. You also have the option to opt-out of these cookies. But opting out of some of these cookies may affect your browsing experience.
Necessary Always Enabled
Necessary cookies are absolutely essential for the website to function properly. These cookies ensure basic functionalities and security features of the website, anonymously.
Functional
Functional cookies help to perform certain functionalities like sharing the content of the website on social media platforms, collect feedbacks, and other third-party features.
Performance
Performance cookies are used to understand and analyze the key performance indexes of the website which helps in delivering a better user experience for the visitors.
Analytics
Analytical cookies are used to understand how visitors interact with the website. These cookies help provide information on metrics the number of visitors, bounce rate, traffic source, etc.
Advertisement
Advertisement cookies are used to provide visitors with relevant ads and marketing campaigns. These cookies track visitors across websites and collect information to provide customized ads.
Others
Other uncategorized cookies are those that are being analyzed and have not been classified into a category as yet.
SAVE & ACCEPT